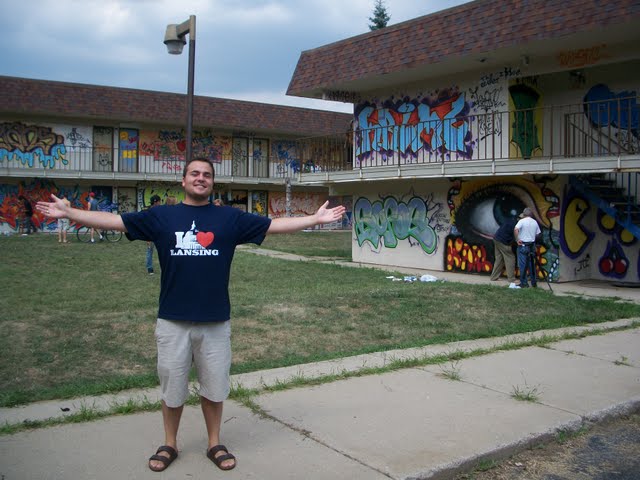 From Capital Gains:
DeBourbon wanted to do a public mural to satisfy his community service requirement. But he needed a legally sanctioned wall to do it on. He called on an old acquaintance, Joe Manzella, who he thought might be able to help.

The two had first met back in 2003, on that same Blue Lakes bus ride through Germany. They connected online but hadn’t really talked much in the intervening years.

“I found him on Facebook and saw he was doing stuff around here. I thought, ‘He must really like Lansing,” says deBourbon. “I called him up and said, ‘Does anybody need a free mural?’”

Originally from the Detroit area, Manzella, 24, came to MSU to study urban and regional planning. After graduating and working a stint at CATA, he’s now living in a loft in REO Town and working as manager of regional programs for the Lansing Economic Area Partnership (LEAP).

He is also the vice president of Accelerate Lansing, a local volunteer group working on urban revitalization, cultural development and talent attraction.

Manzella thought he might be able to find a building to stage a small urban art event, with five or ten graffiti artists.

He brought the idea to the Accelerate group, and mentioned it to Eric Schertzing, Ingham County Treasurer and director of the Ingham County Land Bank

They soon landed on the Deluxe Inn as a likely prospect.

“Everything we’d suggest, [Schertzing] took it up a notch—bigger and bigger and bigger. He completely embraced it from the start.”says Manzella. “He said, ‘It’s a big building, Joe, you’re going to need more than five or ten people,’ and he asked me “Why just do the backside, when this other side is so visible?’”

Make your own photo slideshow at Animoto.