Regionalization Bill (HB 4965)– Not Quite There Yet

Thinking and planning regionally is a cornerstone of the Obama Administration’s approach to creating more livable communities, and it’s a critical component of any well-aimed cost-cutting reform effort.

Improving the transportation connections within a region will undoubtedly improve the interaction of goods, services, and people within that region – it’s a given.  The problem with the current system is the borders… Some are too small, others too wide, but most importantly they are seldom the same.  The Transportation Funding Task Force (TF2) Report described this problem on page 49:

The responsibility for investment in Michigan’s transportation network is distributed to a wide variety of governmental and quasi-government agencies, including MDOT, 83 county road commissions, 535 cities and villages, 79 transit authorities, 40 specialized services agencies, 14 airport authorities, as well as county-run and private airports, bridge authorities, port authorities, and others. There is inherent inefficiency in a system with so many decision-making bodies, and the Task Force recommends that incentives be devised to encourage consolidation, coordination, and regionalization of transportation service and infrastructure provision.

These overlapping jurisdictions, coupled with a disjointed land use planning process, make planning regionally a challenging endeavour.  It’s just not possible to coordinate a myriad of local land use plans with the mix of transportation entities – each with their own set of priorities.  We need a regulatory fix to simplify this system, encourage coordination and consolidation, and bring back sanity and accountability to transportation services.

This sounds all good and well, but how do we do it?  Well, some very good people have taken a crack at it, no introducing House Bill 4965 (Click to read the most recent version as of 12/21/09).  In a nutshell, this bill will create a transit regionalization program that does the following: 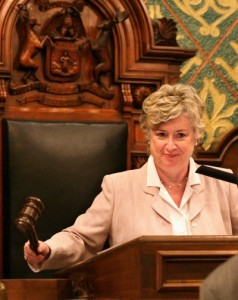 Pam Byrnes co-sponsored HB 4965 - She's got the idea, let's help her and the legislature get us there.

Now these all sound very good and nice, but if you will read back to the excerpt from the TF2, you will see a few key words missing from the bill: incentives, encourage, road, airport, bridge, port, others. Ok, to be fair, we would need a few more bills to attach the road, airport, bridge, and port issues, but the issue remains – why single out public transit in this list?  The entire transportation system is a regulatory nightmare, to single out transit isn’t going to get the best bang for the the legislature’s figurative buck.

The other issue: The TF2 explicitly states that incentives should be used to encourage the desired outcomes of regionalization and consolidation.  This bill is a mandate, and without additional funding, will be an unfunded mandate on MPOs.  The good people who introduced this bill have recognized this, and have signaled that they will not push it forward without funding for the studies.  The mandate proscribed in this bill will jeopardize service in areas where service currently exists by threatening to remove state funding at a time when state funding has never been lower.

The final sticking point with this bill is the eventual outcome: What does it accomplish?  I am still unclear as to that answer.  Mandating coordination in an area won’t solve the DDOT-SMART issue, and won’t do anything to help Kalamazoo’s city transit and county transit merge.  Allowing the MPO and transit providers to draw the lines is akin to the blind leading the blind – regional issues, personality clashes, and all of the things that are wrong today will still be wrong the day after this bill passes.

As my mother always said, “If you can’t fix it, don’t whine about it”.  I’m going to take a crack outlining some solutions to the regional transit issue:

First Point: We need more than a transit-reform bill if we are going to fix the regional issue in Michigan, but I guess there’s no better place to start.

Second Point: Popping open Act 51 isn’t the only place to look; we need to look at Act 168 (I think?) and other acts that create taxing authorities for transportation purposes.

Third Point: Consolidation does NOT mean people losing their jobs

HB 4965 is a good idea in the right direction – regionalize, consolidate, collaborate – but it needs some significant work before it gets us there, and we have to realize that it’s not over yet.  We need to keep looking at ways to maximize the benefits we are getting from our government based on its cost to us.

How it works: Transit funding in the State of Michigan